A Catholic Rev. Fr.  Cyriacus Onunkwo  of the Orlu diocese who was killed by a 6-man Gang in Imo State a few days ago have left the state in a very bad situation as Security officers have been on the heat from the State Governor Rochas Owele to apprehend the perpetrators of this act to be judged by the Law.
This Pressure from the Governor has yielded result as Earlier on today, The Nigeria Police Force, Owerri Command have apprehended the 6-man gang that perpetrated the Act.

Rev. Fr. Cyriacus Onunkwo was the Bishop of The Orlu Catholic Diocese in Imo State. He was one of the most appreciated Reverends in Imo State.


THE NAMES OF THE KILLERS OF REV. FR. CYRIACUS ONUNKWO

The police command was left in shock Today in Owerri as they found out that one of the Corporal in the state, Jude Madu who hails from Mbaise was amongst the 6 man Gang that killed the Reverend Father.
Below are the names of the Gang Members who killed Rev. Fr. Cyriacus Onunkwo in Imo State. 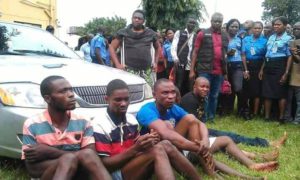 The Confession Made By the Gang Leader, Okafor

The Confession from the Gang Leader Izuchukwu Okafor 'Small' reveals that it was the Police Corporal Jude Madu that Organized the operation. He Said Jude Madu was the one that ordered the Rev. Fr. Cyriacus to come down from his Vehicle on the grounds that he was 'Under Arrest'.
Okafor revealed that he was not aware the Priest would die. He alleged that the priest died because his nose was blocked. Small revealed that this incident happened in Orlu, Imo State on September 1st. This was his exact words he said as he was paraded with his gang members in the state.


“I didn’t know he will die. We covered the nose of the catholic priest, that was why he died.
We saw him on the road and we did not know he was a Reverend Father and we kidnapped him. I was not the owner of the vehicle used in kidnapping the Catholic priest. “I was not the person who led the gang, it was a policeman. When we got to the junction, he asked us to stop in the front of the Catholic priest’s Toyota Corolla, and he asked the priest to come down and that he was under arrest. “I want to tell you that it was Jude Madu that requested that I should get a car and that we were going to somewhere. He did not tell me where we were going.