Published by: » AzTv »
» Date: March 20, 2018
Home » Latest-news » Doctors Remove Women Kidneys during CS Delivery
Fresh reports have surfaced about some medical doctors who now take out Kidneys from pregnant women whose only option of giving birth is through Caesarean section. The reports indicate that after the baby has been removed, the doctors go ahead to remove one of the woman's kidney from her body without her knowing, ( of course she cannot, most people survive on just one kidney for the remainder of their life after removing the other one as long as they can maintain good health hygiene). 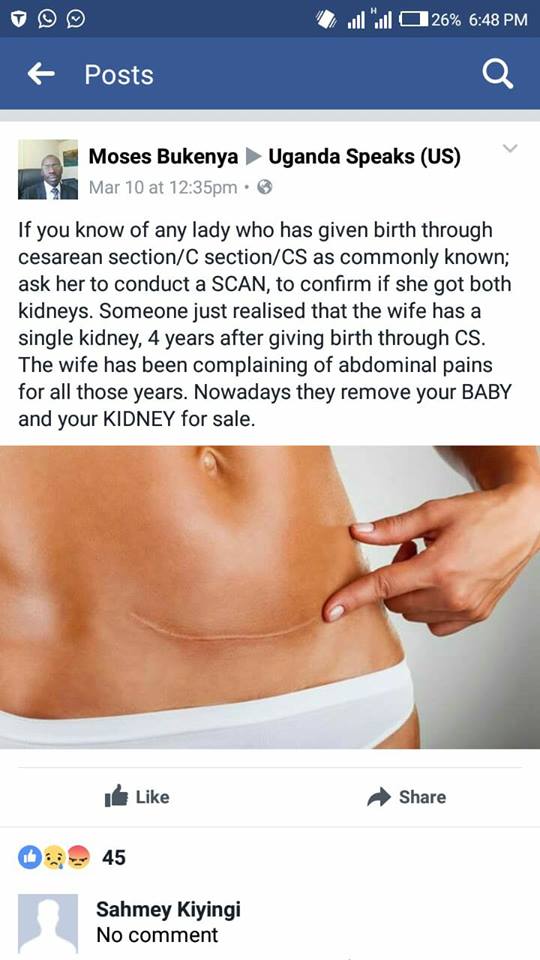 A Facebook user identified as Moses Bukenya from Uganda share a shocking revelation of how some doctor removed a woman's Kidney after Caesarean section about 4 years ago. The woman was said to have been experiencing abdominal pains ever since she came out of the surgery but the husband thought it was a normal pain. They later went for a CS scan which later confirmed that one of her Kidney is no longer in place and she has been surviving on just one Kidney ever since.

The woman who has not given birth since then or undergoes any other surgery within this four years was surprised that the doctors could remove her kidney during her CS operation.

Women who have given birth through Caesarean operations are thus adviced to go for CS scan afterwards to be sure that nothing was removed from their body.

With the increase in the rate of human parts harvesters and the expensive price of a human Kidney now, most doctors are prone to do anything just to get that money, and so we have to be very careful about this.

Not just for CS sections, any other surgery where they will open your body will need a scan afterwards at a different hospital to ensure you are safe and your health is not tampered with.

I did a little research about this and I found accounts of people who found out that their kidney was removed after undergoing certain surgeries.


There is an account of a Farmer in Pahadganj village who accused a Female doctor of removing his Pregnant wife’s Kidney during a Caesarean section five months ago. The Farmers name is Patiram and he gave a full account of the story. Read this story from Hindustantimes.com.
There are so many other instances on the internet but I can't mention all of them here if you want to see more, then you can by following this search keywords.
Share this with your friends now!! You might be saving a life.
Share on Facebook Share on Twitter