Is it Right for the Police to Search People's phones and laptops?

This has been one of the most talked about arguments on the internet ever since the inception of this present administration.
Pictures and videos have surfaced the internet with Nigerians being brutally molested and humiliated by Officers of the Nigerian Police who forcefully seize and go through their phones and laptops.
This has raised a lot of rift amongst Nigerians as some People are of the opinion that the Nigerian Police have No Right to Search any citizen who is in possession of a laptop or phone while some say it is right, saying that  most of these phones are stolen and the police is only making sure that these phones are retrieve.

It is alleged that peoples Vehicles and houses get broken into by hoodlums and they cart away their phones, laptops and any other gadget they can lay their hands on and this is more than enough reasons for the police to organize a Stop and Search at all checkpoints and verify the ownership of the laptops.

So many Nigerians also lamented that even after verifying these devices, by inserting their passwords and photographs, the police go-ahead to tell them to recite the Serial numbers of these devices or provide the receipts.

This they say is very bad as they cannot be moving around with receipts for their phones and laptops or any other device and it is outrageous for them to be able to recite the serial numbers, who does that?

Due to this situation, some top Police Officers have given their own thoughts about this issues as you can see below, I would also love to know what you think about this too.

The Assistant Commissioner of Police, Force Public Relations Officers, Abuja, Jimoh Moshood gave his own comments concerning this issue. He said that;


The Police has no right to check People's phones on the roads, streets or in their cars. People have the right to self-dignity and their Fundamental Human Rights and prying into people's privacy,(including checking peoples phone and Laptops is also violating their rights.

He further said that


The Nigerian Police frowns seriously on this issue and if any policeman searches your phones and Laptops on the road, you have the right to report that policeman for disciplinary actions to be taken against him/her.

He also said that


The citizen can also resist releasing his or her phones and should ask the officer if there is any report against him that him/she is using the phones/laptops for violence or crime and if yes, the person should follow the officer to the Police station to see if there is an entry against him/her. By the time you ask these questions, the policeman will know that you are informed an let you be.
We do not also rule out the fact that there will be cases of Criminal Allegations on Cybercrime against a person and the police have the right to look at your gadgets suspected to be tools of the crime.


The police have the authority to scrutinise the laptops and phones of anyone suspected to be criminals. The policemen on duty do not just stop motorists and ask for their laptops, something must make these police officers suspect a particular person on the road.
There are so many suspected armed robbers, kidnappers or cult suspects that have been arrested through routine checks, and the police have cause to demand information, and if you are not criminally-minded, you can answer them with the required information.

The Police are human and are not there to harm you but to help you. If a Laptop is suspected to be used for a criminal purpose, they can search it or else, it is uncalled for.
If the citizens cooperate with the police by giving necessary information about criminals, the country would be a better place for everybody.
I advice anyone travelling to carry their receipts for their phones and laptops to prevent unnecessary search or embarassment. 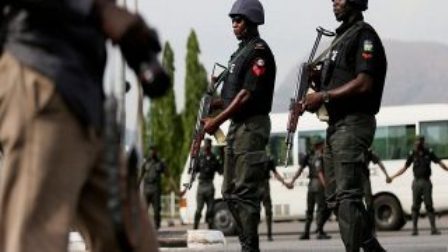 The PPRO of the Akwa Ibom state command, DSP Odiko Ogbeche also gave his comments. This is what he said:


No Police Officer, either on patrol or guard duties, have the right to go through people's phones and laptops, exceptthere is a specific case that has been reported concerning such items under investigation. Laptos and phones are personal and private items of their owners and which may contain data and information which is personal to them, and should be treated as such. Anybody that is confronted with such situation must insist on not releasing them for search, but rater request to be taken to a police station where a senior officer can oversee the situation.
Complaints of rights abuse by policemen, especially the junior cadre, have been on the rise before the authorities came hard on them and decided to put a stop to such illegal acts, especially on the issue of telephone search for extortion purposes by labelling the bearers of such gadgets as ‘Yahoo’ boys or girls, (because it does not exclude ladies).
Members of the public are admonished to  be ready at all times to join hands with the police authorities to discourage  some of the personnel who are still in the habit of perpetrating these embarrassing acts. Policemen are trained and are duty-bound to be civil in all their dealings with members of the public. Only in a situation of investigation involving telephone or a laptop is a policeman entitled to search a citizen’s telephone.

DSP Ajayi Okasanmi had this to say;


I have said it time without number that People's phones and laptops are their personal properties which cannot be subjected to any form of search without the proper search warrants. People have the right to their privacy which must not be violated in anyway by anybody.
If there is a report of a serious crime which involves the use of devices like laptops, phones or any other ICT equipment and a suspect or suspects are rounded up in such an environment, any of such devices found in their possession can be searched on the spot so as not to give them the opportunity of destroying the evidence which may eventually jeopardise the investigation and apprehension of the culprit.
Also, in a case of fraud, where it is discovered that a suspect used his laptop or any other ICT equipment to siphon money from another person’s account, if such a suspect is arrested, the laptop found with him can be searched on the spot regardless of where the person was arrested.
In these types of situations, it will be difficult for the police to get a duly signed search warrant on the spot and the search is highly necessary. Aside from situations like the ones mentioned above, nobody has the right to accost anybody on the road and start violating his or her privacy.