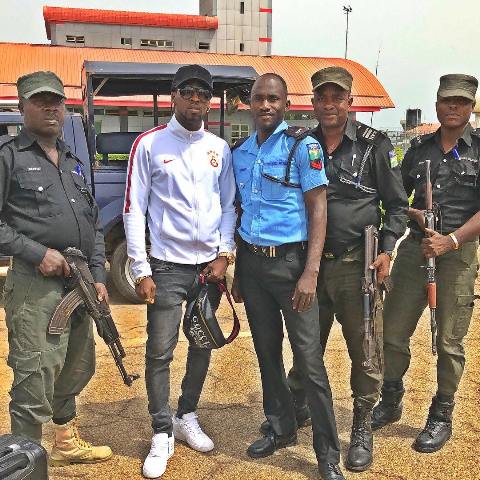 Orezi shared this photo on his Instagram account, showing the security men assigned to be his guards for the event.


A Brief Biography of Orezi

Alhaji Orezi whose camp has been silent for the past months about their music recently unveiled his new record label, Ghen Ghen Entertainment which he says will be the Next Generation brand.
He is a multiple award winner and has worked with other Successful and popular musicians and producers like Kiddominant, Del B, Sauce Kid, Muna, and Igho.


In his 2015, Ghen Ghen album, he had collaborations with other Top superstars like 9ice, Davido, Flavour, Ice Prince, M.I Abaga, Timaya and Wizkid,e.t.c.

Esegine Orezi Allen, Alhaji Orezi as he is popularly known, hails from Delta State in Nigeria and has the following hit songs both from his album to singles. His Top Songs includes Ogede, Jamilaya featuring DJ Jam-Jam" (in 2010), "Rihanna" (2013),"Booty Bounce" ,"What is the Need","You Garrit","Shoki ","Onome Ft DJ Akaba" ,"Shuperu","Shuperu Remix ft Davido","Yagolono" (2016),"Sweet Yarinya".
Share on Facebook Share on Twitter