Published by: » AzTv »
» Date: October 02, 2018
Home » Latest-news » Apc suspends Imo Governorship Primaries indefinitely
AzReports earlier reported about the Imo State Primary election scheduled to hold today as against yesterday due to the fact that its Committee Chairman Alhaji Ahmed Gulak disappeared from his hotel room at Rockview Hotel where he was lodged. 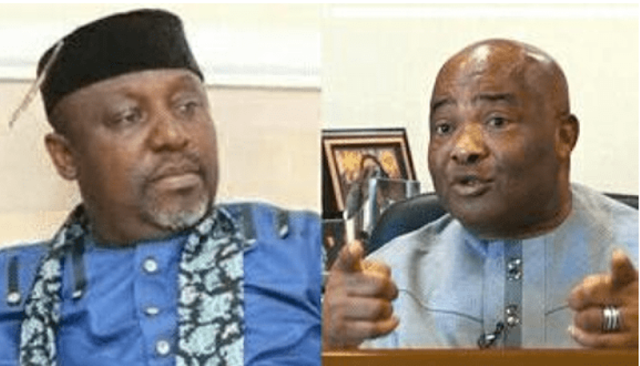 The All Progressives Congress (APC) has Officially cancelled the Imo State Gubernatorial Governorship Primary Elections indefinitely.
The Party Spokesperson, Yekini Nabena who made this announcement, however, did not give any reasons as to why this decision was taken this Tuesday afternoon.


Yekini Nabena further stated that the Senatorial Primaries in all the 36 states in Nigeria has also been postponed until the 3rd of October.

The Controversy in Imo State  Governorship primaries is one of the toughest as the In law to the incumbent Governor, Uche Nwosu battles it out with Senator Hope Uzodinma who is a serving senator and the Current Deputy governor, Eze Madumere amongst other not so popular opponents in the party.
The postponement on Tuesday got really necessary after a heated Face-off between Senator Hope Uzodinma and Governor Rochas. This was also a major reason why the National Body of the APC had to cancel the Electoral exercise for further resolution.
Share on Facebook Share on Twitter