Published by: » AzTv »
» Date: February 18, 2019
Home » Latest-news » Woman defrauds Church in Lagos of N100m
The woman in the picture below was identified as Iwuagwu Onyinyechi. She has been arrested for allegedly defrauding a church to the sum of N100m in the name of assisting the church to raise funds for its charity programme. 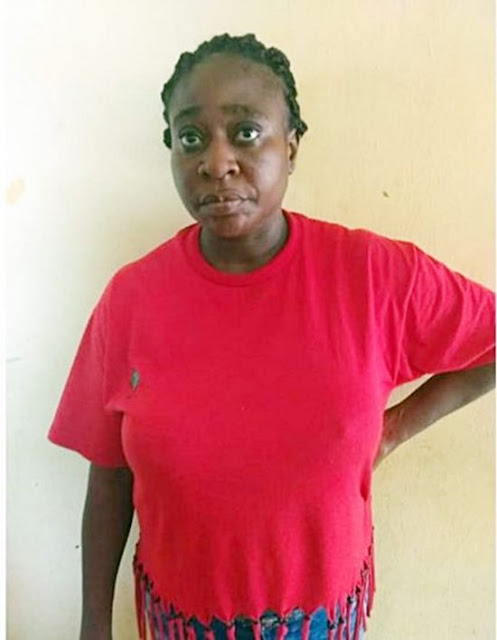 Confirming the incident, the Ogun State Police command spokesperson, Abimbola Oyeyemi said that Onyinyechi was arrested following a petition they received from a Lagos-based lawyer on behalf of the Organization, Barr. Godswill Ojakovo. He revealed that in the petition, the lawyer complained that his client (the church) was defrauded by the suspect through an act of Forgery.

He revealed that Onyinyechi claimed to have got a local Purchase Order (LPO) from a property company and pleaded with the church to help fund the LPO with the promise to repay. Upon approval, the client transferred N33.118m into her bank account.

While waiting for the first LPO to be repaid, the suspect allegedly came back with 2more LPO which she claimed to have gotten from a Catholic Hospital in Iju and a Private school in Ikorodu, both in Lagos State.
The Church further transferred another N77m to her after they were convinced with the proofs she presented.
Upon receiving this last payment in September, 2018, Onyinyechi was said to have disappeared into thin air. This disappearance made the church to start making secret inquiries about the LPO's she presented and found out that they were all forged.
She was arrested on January 21, 2019 and has confessed to the crime she committed.